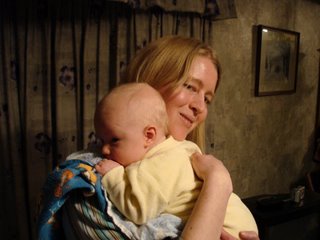 Here is a picture of me with my nephew Owen who I met for the first time last week. I just took it from my sister's blog where there are more pictures of this adorable child with his many doting relatives, but I wanted something on my blog to commemorate the joy of meeting Owen. Owen is the little son of my sister Karen and brother-in-law Clint, a definite answer to prayer. He was born on October 17, 2006, so he is nearly three months old. The first time I held Owen, he screamed in protest and I couldn't calm him, but later I got to hold him when he was content and smiling. He has the sweetest smile, so big and all gums. I especially liked to see him smile at my sister and calm right down in her arms. He is happiest after his feeding and unhappiest when he is tired or when held or passed in a way he doesn't like. Owen is now on his way to Ottawa on the train with his parents and then will be returning to Saskatchewan Tuesday on a four hour flight that will first go to Calgary. Prayers for the flight home would be appreciated as Owen generally needs a car seat or a bed to sleep and doesn't sleep in people's arms very often. The time with Owen was too brief and I hope I can visit Saskatchewan sometime before he starts walking. It was so good to see Karen and Clint again, but seeing Owen was extra special.
Posted by Suzanne at 1:51 pm

You look natural with him.

Thanks. I had lots of practice with Christina (ten years ago).

Glad you enjoyed meeting him. I am so grateful that we were able to come out - I think the timing was perfect.